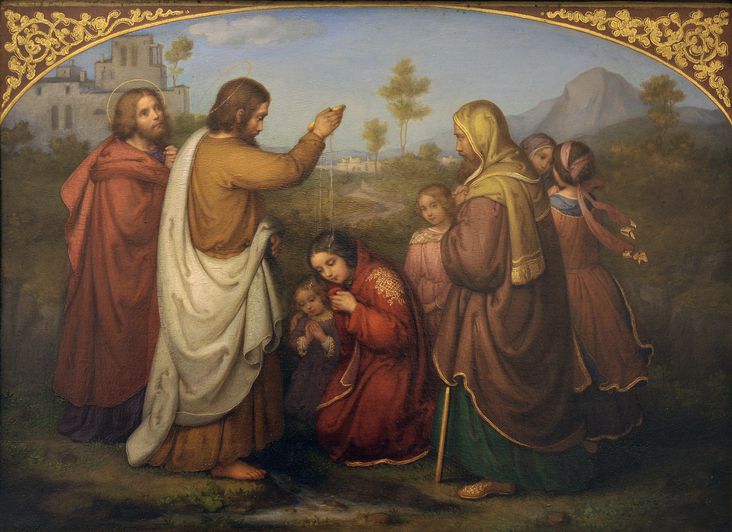 We set sail from Troas and took a straight course to Samothrace, the following day to Neapolis, and from there to Philippi, which is a leading city of the district of Macedonia and a Roman colony. We remained in this city for some days. On the sabbath day we went outside the gate by the river, where we supposed there was a place of prayer; and we sat down and spoke to the women who had gathered there. A certain woman named Lydia, a worshipper of God, was listening to us; she was from the city of Thyatira and a dealer in purple cloth. The Lord opened her heart to listen eagerly to what was said by Paul. When she and her household were baptized, she urged us, saying, ‘If you have judged me to be faithful to the Lord, come and stay at my home.’ And she prevailed upon us. Acts 16:11-15

The Baptism of Lydia

The Woman of Philippi

One day, as we were going to the place of prayer, we met a slave-girl who had a spirit of divination and brought her owners a great deal of money by fortune-telling. While she followed Paul and us, she would cry out, ‘These men are slaves of the Most High God, who proclaim to you a way of salvation.’ She kept doing this for many days. But Paul, very much annoyed, turned and said to the spirit, ‘I order you in the name of Jesus Christ to come out of her.’ And it came out that very hour. Acts 16:16-18

The Flogging of Paul and Silas

But when her owners saw that their hope of making money was gone, they seized Paul and Silas and dragged them into the market-place before the authorities. When they had brought them before the magistrates, they said, ‘These men are disturbing our city; they are Jews and are advocating customs that are not lawful for us as Romans to adopt or observe.’ The crowd joined in attacking them, and the magistrates had them stripped of their clothing and ordered them to be beaten with rods. After they had given them a severe flogging, they threw them into prison and ordered the jailer to keep them securely. Following these instructions, he put them in the innermost cell and fastened their feet in the stocks. Acts 16:19-24

The Conversion of the Jailer

About midnight Paul and Silas were praying and singing hymns to God, and the prisoners were listening to them. Suddenly there was an earthquake, so violent that the foundations of the prison were shaken; and immediately all the doors were opened and everyone’s chains were unfastened. When the jailer woke up and saw the prison doors wide open, he drew his sword and was about to kill himself, since he supposed that the prisoners had escaped. But Paul shouted in a loud voice, ‘Do not harm yourself, for we are all here.’ The jailer called for lights, and rushing in, he fell down trembling before Paul and Silas. Then he brought them outside and said, ‘Sirs, what must I do to be saved?’ They answered, ‘Believe on the Lord Jesus, and you will be saved, you and your household.’ They spoke the word of the Lord to him and to all who were in his house. At the same hour of the night he took them and washed their wounds; then he and his entire family were baptized without delay. He brought them up into the house and set food before them; and he and his entire household rejoiced that he had become a believer in God. Acts 16:25-34

Paul in Corinth with Priscilla and Aquila

But when her owners saw that their hope of making money was gone, they seized Paul and Silas and dragged them into the market-place before the authorities. When they had brought them before the magistrates, they said, ‘These men are disturbing our city; they are Jews and are advocating customs that are not lawful for us as Romans to adopt or observe.’ The crowd joined in attacking them, and the magistrates had them stripped of their clothing and ordered them to be beaten with rods. After they had given them a severe flogging, they threw them into prison and ordered the jailer to keep them securely. Following these instructions, he put them in the innermost cell and fastened their feet in the stocks.

After this Paul left Athens and went to Corinth. There he found a Jew named Aquila, a native of Pontus, who had recently come from Italy with his wife Priscilla, because Claudius had ordered all Jews to leave Rome. Paul went to see them, and, because he was of the same trade, he stayed with them, and they worked together—by trade they were tentmakers. After staying there for a considerable time, Paul said farewell to the believers and sailed for Syria, accompanied by Priscilla and Aquila. Acts 18:1-3,18

But when Gallio was proconsul of Achaia, the Jews made a united attack on Paul and brought him before the tribunal. They said, ‘This man is persuading people to worship God in ways that are contrary to the law.’Just as Paul was about to speak, Gallio said to the Jews, ‘If it were a matter of crime or serious villainy, I would be justified in accepting the complaint of you Jews; but since it is a matter of questions about words and names and your own law, see to it yourselves; I do not wish to be a judge of these matters.’ And he dismissed them from the tribunal. Then all of them seized Sosthenes, the official of the synagogue, and beat him in front of the tribunal. But Gallio paid no attention to any of these things. Acts 18:12-17

Now after these things had been accomplished, Paul resolved in the Spirit to go through Macedonia and Achaia, and then to go on to Jerusalem. He said, ‘After I have gone there, I must also see Rome.’ So he sent two of his helpers, Timothy and Erastus, to Macedonia, while he himself stayed for some time longer in Asia. Acts 19:21-22

Paul Goes to Macedonia and Greece

After the uproar had ceased, Paul sent for the disciples; and after encouraging them and saying farewell, he left for Macedonia. When he had gone through those regions and had given the believers much encouragement, he came to Greece, where he stayed for three months. He was about to set sail for Syria when a plot was made against him by the Jews, and so he decided to return through Macedonia. He was accompanied by Sopater son of Pyrrhus from Beroea, by Aristarchus and Secundus from Thessalonica, by Gaius from Derbe, and by Timothy, as well as by Tychicus and Trophimus from Asia. They went ahead and were waiting for us in Troas; but we sailed from Philippi after the days of Unleavened Bread, and in five days we joined them in Troas, where we stayed for seven days. Acts 20:1-6

On the first day of the week, when we met to break bread, Paul was holding a discussion with them; since he intended to leave the next day, he continued speaking until midnight. There were many lamps in the room upstairs where we were meeting. A young man named Eutychus, who was sitting in the window, began to sink off into a deep sleep while Paul talked still longer. Overcome by sleep, he fell to the ground three floors below and was picked up dead. But Paul went down, and bending over him took him in his arms, and said, ‘Do not be alarmed, for his life is in him.’ Then Paul went upstairs, and after he had broken bread and eaten, he continued to converse with them until dawn; then he left. Meanwhile they had taken the boy away alive and were not a little comforted. Acts 20:7-12